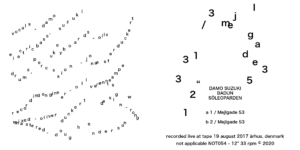 For many years all three artists have been part of the same European music circuits, performing alongside each other on several occasions in different constellations. The result of a shared appreciation and desire to make music together, this album is the crystallisation of their combined musical understanding and vision.

Recorded LIVE in front of an audience at the legendary venue in Mejlgade 53 in Aarhus, the eponymous title of the album celebrates a venue that for two decades has been one of the strongholds in Northern Europe for experimental music.

“To create time and space of the moment” is one of his creative motion. In this way, he made more than 1,000 shows – one and only performances around 45 countries with more than 7,000 local sound carriers (musicians) since 2003, after US attack on Iraq He is curious about oyster to Mesopotamia, try to 48billion brain cell to build up his Football Stadium. He is a ‘68er fake hippy but happy. Believing in Natural (God made) System and not trust in human made system (Artificial). Keeping healthy stomach and brain, switch off all those MSM and Silicon Valley snob media that bring only ugly energy. He is a waterproofed Japanese with bone and skin, but not with a camera. He joined Oliver and Jonas few performances.

Generation ’79, grew his musical wings around Århus, Denmark, recording and producing electronica and playing jazz for more than 20 years. Founder of the chameleonic group Badun in 2002 and a long time organiser involved in the electronic avant-garde movement in Denmark, he has helped curate influential festivals and events in and around the city of Århus, introducing experimental music in all in many different guises throughout the region.

Danish experimental musician with a unique life-path. As an 18 year old he became a student under the late Indian maestro Ravi Shankar and a year later became part of Shankar’s live group. Creating the musical alias Snöleoparden in 2004, Jonas embarked on a musical journey that taken him to Greenland, Indonesia and Pakistan, where he has collaborated and toured extensively – from royal cremations to Black Magic ceremonies in Indonesia, and stadium concerts to secret Sufi festivals in Pakistan. Jonas released his debut album as Snöleoparden in 2008.