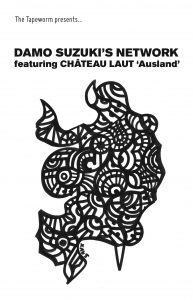 Château Laut’s Stefan Fähler writes: “I contacted Damo in 2009. He didn’t reply immediately and at one point I just forgot about it… So, it was a huge surprise when he replied, exactly a year to the day later, explaining his email’s calendar was weird and he had only just now received my mail. Quickly, we arranged all details for our concert-to-be.

We first met a couple of months later, at the airport. We picked him up in the morning and were stoned just an hour later in our kitchen. The energy for the whole day was so peaceful and warm. On the way to soundcheck we saw barricades and police vans on the streets in readiness for 1 May – a date famous in Berlin for rioting and protest. We joked about this “predictable riot”, marked in calendars for all to see.

The gig at Ausland proceeded organically. We shared many beautiful moments, both on and off stage. Damo was so much into the atmosphere and the crowd that, after our main set, we went on-stage a second time. Afterwards, we crashed at our place, downing a couple of whiskeys before going to sleep, happy.

We kept in touch. He became something close to a spiritual mentor for me. He gave us contacts around the globe for travels and put me in touch with many nice people. He once said to me, one of the most important things in life is to travel. We were glad he stopped by our place on his journey.” – Stefan Fähler, Berlin, 23.viii.2017